Some years ago I wrote an article on how to wake on lan a (SSHFS) fileserver on demand using autofs.

Today I want to describe a more generic way to do the same. This should not only work for SSH but for every services that communicates via TCP. Everything you need is systemd, netcat (nc) and a wake-on-lan tool like etherwake.

I've got a lot of feedback for my old article How to connect to a FortiGate IPSec-VPN using Linux. However, the connection with vpnc was never stable for me, it always segfaults after a while and I had to restart it.

So I did some more research and found a relative new project called openfortivpn by Adrien Vergé, which uses the SSL VPN tunnel feature of Fortigate instead of IPSec. Additionally, NetworkManager support already exists thanks to the Gnome people.

At the moment I want to get rid of an OpenLDAP instance wich is only used to authenticate users on a single host by now. I want to take all user accounts and store them as Unix user accounts in /etc/passwd, /etc/shadow and /etc/group. The only problem is the userPassword field. The passwords in OpenLDAP are hashed with the SSHA algorithm, which means Salted SHA-1. They look like "{SSHA}Nxs1gQ299W/QPXoRwW9kDZfaPpLApSWP", which is the Base64 encoded hash and salt.

SHA-1, and especially salted SHA-1, aren't supported by Linux's crypt. So while I can migrate the user names, uid, gid, homeDirectory and unixShell I am not able to migrate the user's passwords. That is very bad.

Fortunately, PAM and pam_exec.so exists! pam_exec calls a user-defined program that can do it's own verification routine. So I wrote a little Python script that looks into the system's shadow file and if the user's password hash starts with '{SSHA}' tries to verify it using the SSHA algorithm:

Store this script under /usr/local/sbin/verify_ssha_passwd, make it executable and change the /etc/pam.d/common-auth from:

This will call verify_ssha_passwd if and only if pam_unix.so fails to verify the password on its own.

This script might be vulnerable to timing attacks, so don't use it in critical environments. Also it doesn't respect the additional shadow fields like 'maximum password age' and 'account expiration date'! If your security setup relies on these fields this script is not for you!

Did you ever want to play a video as screensaver? With KDE this is pretty easy. 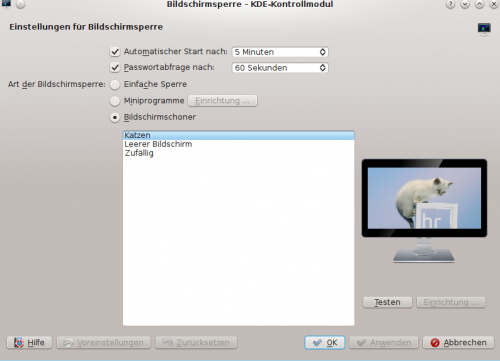 more about me...
Datenschutzerklärung